Over the span of seven years, m+b performed extensive work on the Medicine Hat College. The project started with a 75,000 sq.ft. expansion to the main floor which houses the Vera Bracken Library, the second and third floors which is dedicated to information systems technology classrooms, and an IT support and campus data centre.
This project was  followed by two separate student residences which were built for the college. The Brooks Campus Student Residents (32 unit) and a MainCampus Student Residence building (100 units), which was located in the north east  corner of the campus.
In addition, several upgrades/renovations were performed at the campus. – C Wing Central Core Fire Alarm Upgrade – C Wing Central Core Renovation which included a 21, 000 sq.ft. renovation of the vacated (previous) Vera Bracken Library, and the administration office – C Wing Cafeteria Renovation which consisted of a 30,000 sq.ft. renovation where a new main entrance, campus store, and cafeteria was constructed. – S and L Wing Renovations a 10,500 sq.ft. renovation where the classrooms located in these wings were upgraded, and a few select classrooms wereconverted into office space. – S Wing Learning Centre which was a 5,200 sq.ft.  classroom renovation, half of which included audio visual learning capability additions. – L Wing Renovations Phase 1/Phase 2 consisted of over 28,000 sq.ft. of renovations to various chemistry and biology labs, including a new green house.
Our seven year time at this campus was wrapped up with a roadway and parking project which included adding new site lighting and power distributionfor new road configurations and parking expansions. – S Wing Learning Centre where 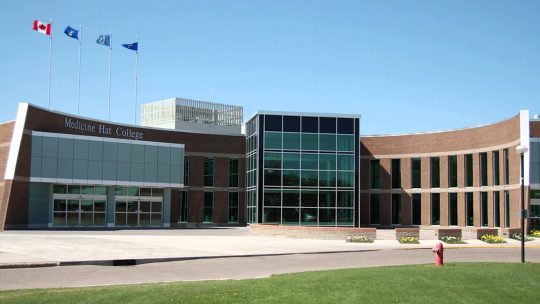